Celebrating 75 years of UN and UNESCO 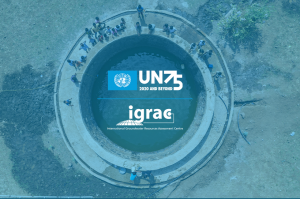 This year marks the United Nations’ and UNESCO’s 75th anniversary and in honour of this, the national UNESCO commission of the Netherlands is organising a one-week celebration. From 19 to 24 October 2020, many UNESCO organisations and heritage sites in the Netherlands will be illuminated in the UN’s trademark blue colour and all UN / UNESCO affiliated organisations based in this country will raise awareness about the crucial work that has been done under the UN flag over the past 75 years.

UNESCO in the Netherlands

UNESCO is represented all over The Netherlands, with over 100 recognized heritage sites and institutes. Together, we are not only part of the international UNESCO family, but also affiliated to the United Nations. Thereby, we underline the ideals of the UN and our shared efforts for achieving the Sustainable Development Goals (SDGs).

IGRAC is UNESCO Global Groundwater Centre, financially supported by the Government of the Netherlands and in-house partner of IHE Delft Institute for Water Education, another UNESCO category II centre based in Delft, the Netherlands.

The IGRAC story began in 1999, when UNESCO and the WMO took the initiative to establish an international groundwater resource assessment centre. In 2000, the Government of the Netherlands expressed interest in hosting the centre and IGRAC was launched in March 2003, during the third World Water Forum (WWF3) in Kyoto. Since then, IGRAC has been providing an independent content and process support to UN related activities, focusing particularly on transboundary aquifer assessment and groundwater monitoring.

In January 2011, the Government of the Netherlands reaffirmed its commitment to IGRAC and in June 2011 IGRAC was registered as a legally independent foundation. Becoming an independent organisation facilitated IGRAC’s recognition as a UNESCO centre. The agreement between UNESCO and the Kingdom of the Netherlands regarding IGRAC was signed in November 2011 and it is renewed in 2016. Memorandum of Understanding with WMO was signed in 2004, and renewed in 2016. IGRAC is a UN-Water partner and works with numerous UN agencies and programmes, such as UNECE, UNEP, UNHCR, etc. IGRAC is proud to be affiliated with United Nations.