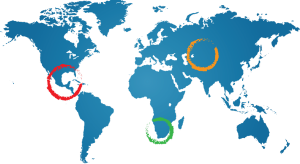 IGRAC and UNESCO-IHP launched a set of publications that were prepared within the framework of the “Groundwater Governance in Transboundary Aquifers (GGRETA)” Phase 1 project (2013-2015), funded by the Swiss Agency for Development and Cooperation (SDC), and implemented by UNESCO International Hydrological Programme (IHP). The first phase of the GGRETA project achieved raising the much-needed attention of the international community on transboundary aquifers by providing in-depth assessments of three transboundary aquifers, namely the Stampriet aquifer in Southern Africa, the Pretashkent aquifer in Central Asia, and the Trifinio aquifer in Central America.

Building on the scientific knowledge generated by the project, a strong focus was given to a water diplomacy track as a means to promote gender equality and enhance capacity-building for improved transboundary and correlated domestic water resources governance.