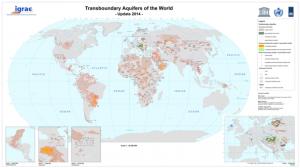 The TBA Map 2014 shows the state of information presently available on the occurrence and extent of transboundary aquifers world-wide. The map provides a global overview of these important shared water resources and intends to encourage further research and assessment thereof. The map is based on the most recent inventory results of many active working groups around the world. Inventories and assessment of TBAs across the world, followed by information exchange among states sharing an aquifer are considered prerequisites for appropriate TBA governance. This map aims to contribute to raising awareness on the importance of the governance of shared aquifer resources and to building the much needed global knowledge base. Full detail on the methodology creating this map as well as definitions and additional information such as on the legend are given on the back side of the map.

There are now 608 identified transboundary aquifers, including 226 transboundary ‘groundwater bodies' as defined in the European Union Water Framework Directive (EU WFD), underlying almost every nation. At present there are 83 TBAs in Africa, 73TBAs in Americas, 138 TBAs in Asia and 1 TBA in Oceania. In Europe 87 TBAs have been identified and 226 transboundary groundwater bodies (GWB). The number of TBAs and GWB has been increasing steadily since the first ‘Transboundary Aquifers of the World Map' was released in 2009 (380) and in 2012 (455). It is likely that new TBAs will still be identified in the future and that the delineation of existing TBAs may be refined once further studies are conducted.

Given that knowledge on TBAs is still limited, individuals and organisations (national and international, governmental and non-governmental) are invited to provide comments and suggestions to further improve the Map of Transboundary Aquifers of the World.