MAR Project in Kenya successfully carried out by IGRAC 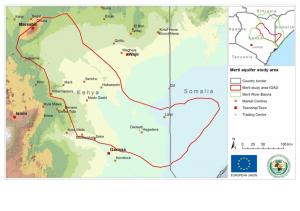 Recently IGRAC, together with Acacia Water, carried out a project on Manage Aquifer Recharge (MAR) in the transboundary Merti Aquifer, shared between Kenya and Somalia. The project was commissioned by IGAD Inland Water Resources Management Programme (IGAD-INWRMP). The overall goal of the project was to identify and map the potential for different MAR applications within the Merti aquifer and to develop a MAR data management system. Based on the project results recommendations were given on the potential for different MAR applications in the region.

The IGAD-INWRM team has selected the Merti aquifer, shared between Kenya and Somalia, as pilot transboundary aquifer (TBA) for this project. The Merti aquifer is a large non-renewable aquifer that is one of the few reliable water sources in this semi-arid region. Since the early 1990's there has been a significant increase in population due to the settlement of a large number of refugees from Somalia in the Dadaab area, which led to an increased demand for drinking water. For this drinking water both local population and refugees depend entirely on groundwater. However, although the Merti aquifer is a vital source of fresh water in the region, still relatively little is known about the extent of the aquifer, its hydrogeological parameters and groundwater recharge.

The final results were presented by IGRAC during the workshop on MAR technology for the Merti aquifer, which was held on 26-27 March 2015 in Naivasha, Kenya. This workshop was combined with a training session on the use of a MAR data system. The objectives were to promote the use of a data-driven approach and equip local experts with the knowledge and skills to apply MAR.

The Inland Water Resources Management Programme (INWRMP) forms part of a major donor-supported effort to strengthen and reinforce the mandate of IGAD on behalf of its member states. The key issues that the region has faced in the past decade are related to instability and scarcity of water resources, coupled with the vagaries of the climate. As a result, the Management of Aquifer Recharge forms part of a broader tool sets for tackling water shortage and promoting a sustainable use of the water resources. To that effect, INWRMP launched a consultancy service looking at designing and developing a data system for the application of Management for Aquifer Recharge (MAR) for the Merti Aquifer.