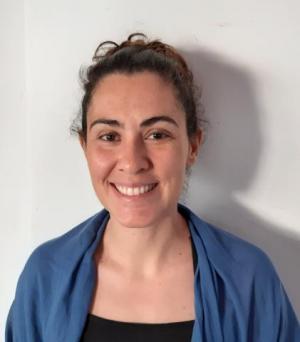 At the start of 2020, Raquel Sousa joined the IGRAC team as a groundwater specialist. After having worked on a capacity building project in Guinea-Bisseau for two years, Raquel decided to react on the vacancy at IGRAC: "I look forward to learn more globally and play an active role in facilitating international groundwater management, keeping in mind that access to water, and specifically groundwater, is an ever-increasing need", Raquel says.

What is your academic background?

"I have a degree in Environmental and Applied Geology. Later, I did a Master on Geologic Processes, during which I focused on Hydrogeology, developing a thesis on topographic spatial analysis and water table occurrence."

What is your work experience?

"I started my career as a Science Communicator in an Interactive Geosciences Museum, dedicated to divulge the internal and external geological processes of Planet Earth. Afterwards, I worked as a consultant for the construction of dams, mini-hydric plants and, later on, also Managed Aquifer Recharge projects. Before joining IGRAC I lived in Guinea-Bissau, where I worked on a project dedicated to the decentralization and capacity building of the national water and energy authorities.

When I decided to work in groundwater, I joined the International Association of Hydrogeologists (IAH). Later I became Co-Chair of the Early Career Hydrogeologist Network (ECHN) and later President of IAH Portuguese Chapter. Both terms have now come to an end."

Why did you apply at IGRAC?

"To join a team that is committed to addressing groundwater issues worldwide. Committed to the protection and fair management of groundwater resources from a practical and broad perspective, from governance to local monitoring, from the local to the regional and international scale."

Staff Member
Who We Are
Information