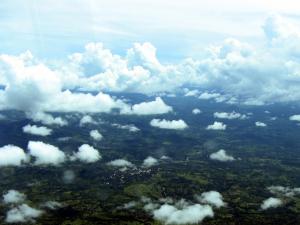 From 9 - 13 November 2015, IGRAC organised a regional training within the framework of the GGRETA project. During this training that will be held in Esquipulas, Guatemala, she will train local groundwater professionals on how to use the GGRETA Information Management System (IMS).

The original object of study in this case was the Esquipulas-Ocotepeque-Citala Aquifer System, referred to as Trifinio Aquifer because of the name of the area where it is located. This system appeared as shared by Honduras, El Salvador and Guatemala and was well representative of the many intermountain alluvial aquifers that overlie fractured hard rock basements, with complex permeability distribution linked to both fractures and primary porosity.

The last studies conducted in the framework of the project showed that there is no hydraulic continuity between the aquifers present in the Cuenca of Esquipulas, including the deeper one below the shallow unconfined one, and the groundwater found downstream (Citala-Ocotepeque Aquifer) in Honduras and extending further South East into El Salvador. The only connection between the two aquifer systems is represented by the Rio Lempa itself, which develops both functions of recharge and discharge of the aquifers.