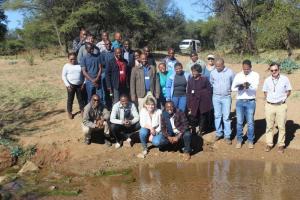 The International Water Management Institute (IWMI) in collaboration with the IGRAC, the Government of Botswana (Department of Water Affairs - BW) and South Africa (Department of Water and Sanitation - RSA) hosted a four-day inception workshop for the 2nd Phase of the RAMOTSWA Project at the Protea Hotel, Mahikeng, South Africa, June 06-09, 2017. The meeting launched the second phase of the project The Potential Role of the Transboundary Ramotswa Aquifer (RAMOTSWA), which is funded by the United States Agency for International Development (USAID) with collateral funding from IGRAC as well as WLE, the Water, Land and Ecosystems Research Program under CGIAR.

The overarching objective of the RAMOTSWA project (1st and 2nd Phase, four years in total), led by IWMI, is to support a long-term joint vision and cooperation on the shared groundwater resources of the Limpopo River Basin and build a community of practice around transboundary aquifer management in the Southern African Development Community (SADC) region.

The RAMOTSWA Project is serving to pave the way for transboundary cooperation on groundwater in the SADC Region, and is setting procedures and standards for how to deal with shared groundwater resources in the region. The Project has developed a baseline assessment of the hydrogeological as well as socio-economic, and institutional setting around the aquifer, besides specific reports on the hydrogeology, the sanitation conditions, the groundwater quality issues, and gender issues. It is now moving to the development of a joint hydrogeological model that will help inform future scenarios for the aquifer area as well as best options for enhancing the capture, storage and retrieval of water in the aquifer, so-called ‘managed aquifer recharge’ in order to enhance the water security in face of climate change and increasing population in the area. Solutions for augmenting and securing crop productivity and water efficiency in various agricultural production systems in the area are also being explored with local stakeholders.

Transboundary contamination in both groundwater and surface water has become apparent and documented as part of the project, indicating that not only the resource quantity, but also the quality is of concern in this border region with scarce water resources. Yet, there is great development potential if management of the groundwater resources in conjunction with surface water is addressed effectively. As part of the project, a Strategic Action Plan is being developed with partners and stakeholders. In addition, the anchoring of the incipient transboundary cooperation between the two countries is now being gradually consolidated within existing cross-border cooperation mechanism, namely the Joint Permanent Technical Committee between Botswana and South Africa, working under the LIMCOM, the Limpopo Water Course Commission.

Besides project partners, the meeting was also attended by USAID, the Development Bank of Southern Africa (DBSA), the SADC Groundwater Management Institute and universities from both countries.