Recognising the connection between groundwater and sanitation

World Toilet Day celebrates toilets and raises awareness of the 3.6 billion people living without access to safely managed sanitation. It is about taking action to tackle the global sanitation crisis and achieve Sustainable Development Goal 6: water and sanitation for all by 2030. This year, the theme for World Toilet Day 2022 is 'Sanitation and Groundwater', but how are sanitation and groundwater related? 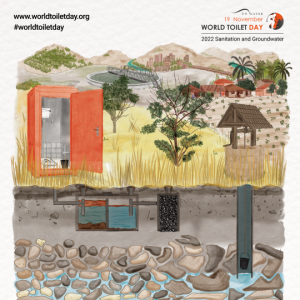 We face a global sanitation crisis. Today, 3.6 billion people are still living with poor quality toilets that ruin their health and pollute their environment. Every day, more than 800 children die from diarrhoea linked to unsafe water, sanitation and poor hygiene.

This year, World Toilet Day focuses on the impact of the sanitation crisis on groundwater.

Groundwater is our most abundant source of freshwater. It supports our drinking water supplies, sanitation systems, farming, industry and ecosystems. As climate change worsens and populations grow, groundwater is vital for our survival.

Safely managed sanitation protects groundwater from human waste pollution. Sustainable Development Goal 6.2 is the world’s promise to ensure safe toilets for all by 2030. This means everyone having access to a toilet connected to a sanitation system that effectively removes and treats human waste. But, we are seriously off track to meet this target.

We must work on average four times faster to ensure everyone has a safe toilet by 2030. The connection between sanitation and groundwater cannot be overlooked. Time is running out. We must make the invisible visible.

What is the global sanitation crisis? 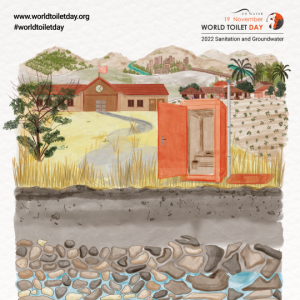 Nearly half the world’s population still lives without a “safe toilet”. A “safe toilet” is shorthand for a safely managed sanitation system, which means a toilet not shared with other households, that either treats or disposes of human waste on site, stores it safely to be emptied and treated off-site, or connects to a functioning sewer and treatment plant.

People living without access to safely managed sanitation systems use shared facilities or those that do not safely dispose of human waste. Almost 500 million people relieve themselves outside (‘open defecation’) and 3.6 billion people – nearly half of the global population – are not connected to safely managed sanitation systems, leaving human waste untreated and contaminating communities and water used for drinking, hygiene, recreation and food production.

This crisis has a profound impact on public health, educational attainment, economic productivity and environmental integrity. For women and girls in particular, the indignity, inconvenience and danger of not having access to safely managed sanitation is a barrier to their full participation in society.

How does inadequate sanitation impact on groundwater?

Groundwater utilization for drinking water is endangered by the uncontrolled disposal of human excreta, especially in densely populated urban settlements, and the absence of sustainable sanitation systems in fast-growing cities and peri-urban areas. These are five areas of concern:

How do sanitation solutions protect groundwater?

Safely managed and properly sited sanitation protects humans and groundwater from the pathogens in faecal waste. A safe and sustainable sanitation system begins with a toilet that effectively captures human waste in a safe, accessible and dignified setting. Either, the waste then gets stored in a tank, which can be treated on-site where liquid waste infiltrates to soil and solids may be emptied later by a collection service. Or, it is transported away by a sewer connected to a treatment plant and then safely disposed of or reused. Safe reuse of treated human waste can capture greenhouse gas emissions for energy production and provide agriculture with a reliable source of water and nutrients.

Sustainable sanitation systems need to be able to withstand more frequent floods, droughts, changes in water availability and sea level rise brought on by climate change, so that services always function and groundwater is protected. In areas experiencing water scarcity and decreasing groundwater availability treated wastewater can be used to recharge aquifers and replenish groundwater supplies.

Groundwater protection zones are vital, as part of a context-specific, integrated approach to ensuring sanitation systems, land use planning and water abstraction do not adversely impact the quality and quantity groundwater resources, particularly in areas where aquifers are close to the surface.

Why should we care about groundwater pollution?

Globally, at least 2 billion people use a drinking water source contaminated with faeces. Remediation of groundwater pollution caused by humans is often a long and difficult process. This increases the costs of processing groundwater, and sometimes even prevents its use. Exploring, protecting and sustainably using groundwater will be central to surviving and adapting to climate change and meeting the needs of a growing population. Why is solving the sanitation crisis important? Having access to safely managed sanitation services, in combination with safely managed drinking water services and good hygiene facilities and behaviours, is the foundation of public health and therefore essential for the realization of all other human rights. Toilets drive improvements in health, gender equality, education, economics and the environment. Particularly for women and girls, toilets at home, school and at work help them fulfil their potential and play their full role in society, especially during menstruation and pregnancy.

What can decision-makers do about sanitation and the link to groundwater?

The connection between groundwater and sanitation has always been critically important but not fully recognized. We must protect groundwater from pollution and use it sustainably, balancing the needs of people and the planet.

Groundwater’s vital role in water and sanitation systems must be reflected in policymaking. Furthermore, under the SDG 6 Global Acceleration Framework, particularly in the areas of governance, capacity building, data and information, the link between groundwater and sanitation needs to be strengthened through inclusive policy and its coordinated implementation. In order to achieve that, groundwater- and sanitation specialists, policymakers and practitioners must all increase their cooperation.

And it is worth it, because every $1 invested in basic sanitation returns up to $5 in saved medical costs and increased productivity, and jobs are created along the entire service chain.

Sanitation and Water for All (SWA) has developed a handbook for parliamentarians, entitled 'Water & Sanitation: Realising human rights and achieving sustainable development goals'