Aquifers provide people with a multitude of benefits in various forms, ranging from drinking water, over flood-protection to the provision of ecosystems and ecosystem services. Often, however, these benefits are undervalued and consumed without taking into account that unsustainable usage imposes negative externalities on present and future generations. Groundwater valuation is an instrument for efficiently allocating groundwater resources over time and between uses. Specifically, it supports sustainable groundwater management by visualising trade-offs between different water uses and showing the magnitude of consequences of over-abstraction and misallocation. In a transboundary setting it moreover provides a foundation for mutual understanding through enabling discussions on the basis of a common monetary denominator.

The report 'Significance and State of Affairs of Groundwater Economics in the Governance of Transboundary Aquifers', written by IGRAC, aims at contributing to the growing body of scientific research, by enquiring into the role of groundwater economics in the governance of aquifers with a specific focus on transboundary aquifers.  Content-wise, this study is divided into two main parts. Part 1 deals with the description of the economic value of groundwater, which can serve as a guide/framework for decision-making also by non-economists. Part 2 then concentrates on one or two case studies by applying the framework outlined in part 1. Thereby an overview over the current state of affairs in the valuation of groundwater in transboundary aquifers is given.

Due to difficulties in establishing and enforcing property rights for groundwater resources, a common goods problematic arises, where users only take their own costs and benefits into account and ignore consequences that might arise for others. Consequences of over-abstraction are, inter alia, an amplification of future scarcities, an increase in extraction costs, and environmental degradation. As a result, allocations are often not only inefficient across uses, but also inefficient with regard to future generations. This necessitates a quantitative approach as a solid basis for decision making. 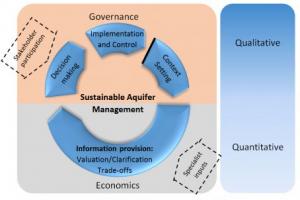 Model used during the research[/caption]

The most commonly used framework for valuing natural resources is the Total Economic Value (TEV) framework, which consolidates different benefit-categories, thereby assessing the overall utility of a resource. Direct use values are derived from actual consumption of the good, either by individuals or sectors. Due to its generally good quality, groundwater is - next to uses like irrigation - an important source of drinking water. Additionally, in karst aquifers water potentials are often big enough to generate hydro-power. Indirect use values are not directly consumed and thus do not diminish the resource stock. Since groundwater discharge naturally occurs into surface water bodies, it ultimately delivers benefits in form of landscapes for recreational activities, as well as biological diversity and habitats. Discharge furthermore sustains brackish water in estuaries, as well as groundwater dependent ecosystems and their services. Additionally, aquifers act as a carbon sink by dissolving CO2 which subsequently precipitates as carbonate. Especially in clay and peat soils, which are prone to subsidence, it contributes to the integrity of the land. A higher groundwater pressure due to larger stocks also prevents the intrusion of seawater into the aquifer. Lastly, groundwater plays an important role in reducing the negative impacts of waste by diluting contaminants. Apart from these use values, the TEV also points to additional (non-use) benefits provided by groundwater. Not extracted groundwater holds for instance an option value, i.e. the possibility to use water, or elements sustained by water, in later periods. Finally, some people might draw satisfaction from the mere existence of the aquifer or they might value the fact that services can be provided to other individuals and/or other generations.

In order to value the benefits identified above, researchers have several methodologies at their disposal. While those methodologies have different data requirements and are thus suitable in specific circumstances, they also have disparate time and monetary requirements and do not all measure the same aspects of the TEV. Generally there are two main categories, namely revealed preference methods and stated preference methods, where the former relies on the assumption that preferences are exposed through purchasing behaviour, whereas the latter involves questioning a representative sample population about their preferences in hypothetical markets. Stated preferences require elaborately designed studies, but are able to capture not only direct but also indirect use values. Revealed preferences on the other hand rely on market data, and thus only capture direct use values. Owing to the sometimes substantial time and monetary requirements, an additional approach has gained importance over the last years - namely the benefits transfer, i.e. the utilisation of value estimates identified in other studies.

An economic valuation of a resource is a complex venture necessitating the collaboration of various specialists, ranging from ecologists and hydro-geologists to economists. In order to be able to value a groundwater resource, several steps have to be performed. In the beginning, the physical and social boundaries of the system have to be defined, whereafter the valuation scenario itself needs to be outlined, bearing in mind that only differences between scenarios, i.e. changes, can be valued. The latter step involves, inter alia, a profound understanding of physical relations. Finally, the evaluation itself requires the determination of the affected benefits, as well as the adequate valuation methods, and an estimation and aggregation of values. It needs to be emphasised that an economic valuation has several limitations. Across countries, values, for instance, need to be adjusted for income differences. Moreover, a distribution analysis can be helpful to additionally consider equity aspects, which are otherwise overlooked.

After researching two specific cases of transboundary aquifers, it was found that at the moment data availability is largely insufficient regarding its usability as a basis for performing an economic valuation. A future focus should therefore be on the collection information at least on an aquifer and application level, collecting as much additional data as possible on different aspects of water uses. It is expected that valuation studies, if conducted conservatively and under the provision of explicitly stating uncertainties, can provide valuable input for decision making processes within sustainable transboundary aquifer management. Calculating economic values can, for instance, support the implementation of various policies which are at the moment still difficult. By emphasising the monetary value of inefficiencies or externalities it is expected that a sense of urgency can be created in advancing enactments. Moreover, it is expected to be possible to realise efficiency gains across benefits, by allocating water to the use with the highest marginal benefit, as well as within benefits, by incentivising and measuring efficiency improvements in, for instance, irrigation agriculture. Therefore, governance specialists should embrace results from such studies as additional inputs (cf. figure).

More information on the value of groundwater can be found in the report.