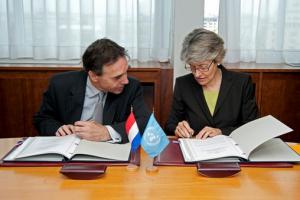 UNESCO and the Kingdom of the Netherlands signed agreement about IGRAC. In 1999, UNESCO and WMO took an initiative to form an international groundwater centre. With the support of the Government of the Netherlands, this initiative led to the launch of IGRAC in 2003. Although providing huge support to IGRAC activities all these years, UNESCO was not in favour recognising IGRAC as UNESCO centre before an independent legal status and long-term financial support of IGRAC were secured. In January 2011 the Government of the Netherlands confirmed its commitment to IGRAC and:

THE AGREEMENT BETWEEN THE UNITED NATIONS EDUCATIONAL, SCIENTIFIC AND CULTURAL ORGANIZATION, AND THE KINGDOM OF THE NETHERLANDS, CONCERNING THE ESTABLISHMENT AND OPERATION OF THE INTERNATIONAL GROUNDWATER RESOURCES ASSESSMENT CENTRE IN THE NETHERLANDS AS A
CATEGORY 2 CENTRE UNDER THE AUSPICES OF UNESCO

In meantime (June 2011), the IGRAC foundation is registered at the notary in Delft and in the Chamber of Commerce in The Hague. Hence, IGRAC is now officially the UNESCO global groundwater centre, a legally independent foundation and the in-house partner of the UNESCO-IHE, in Delft, the Netherlands.