The WHYMAP consortium has launched the World Karst Aquifer Map (WoKAM). The map is intended to increase the awareness of these valuable but vulnerable freshwater supplies and to help to address global water resources management. This World Karst Aquifer Map allows a more precise global quantification of karst systems and will help to increase awareness of karst groundwater resources in the context of global water issues. It should also serve as a basis for other karst-related research questions at global scales: for example, those related to climate change, biodiversity, food production, geochemical cycles and urbanisation. You can download the map here.

The importance of karst aquifers

Karst aquifers constitute valuable freshwater resources for hundreds of millions of people worldwide. In many countries and regions, groundwater from karst aquifers is the major source of freshwater for drinking water supply and agricultural irrigation. Many large cities, such as Vienna, Rome, San Antonio, Damascus and Taiyuan, rely entirely or predominantly on karst groundwater. In the context of climate change and population growth, the pressure on these freshwater resources is expected to increase.

Many karst aquifer systems are connected over large areas and constitute transboundary groundwater resources. For example, the Dinaric Karst System is shared between northeast Italy, Slovenia, Croatia, Serbia, Bosnia and Herzegovina, Montenegro, Macedonia and Albania. The Southwest China Karst, one of the world’s largest karst regions, is shared between seven Chinese provinces and extends across the border into Vietnam. These examples highlight the need for transboundary water management and fully integrated water resources maps.

Characteristics and challenges of water resources in karst 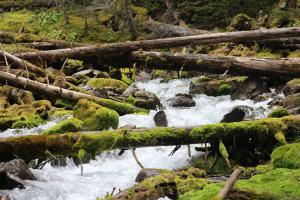 Karst aquifers often drain towards large springs. Most of the largest springs on our planet are karst springs. The springs generally display marked discharge variations in response to rainfall events or snow melt. Some karst springs have maximum flow rates exceeding 100 cubic meters per second, but run dry in drought periods. This high degree of hydrologic variability is a major challenge in the utilisation and management of karst aquifers, because water suppliers and consumers need relatively constant and reliable freshwater sources. Karst water can also be abstracted from pumping wells, drainage galleries, or from underground cave streams. Deep carbonate rock aquifers may constitute important reservoirs of thermal and mineral water, which can be used for bathing or geothermal energy production. The thermal springs and baths of Budapest are a prime example of thermal water resources in karst.

Exposed karst aquifers are particularly vulnerable to contamination. Chemical and microbiological pollutants can easily enter the aquifer and spread rapidly through the network of fractures and conduits, often without effective processes of filtration and self-purification. Therefore, karst aquifers require specific protection and management approaches. Karst terrains are also challenging in terms of hydraulic engineering and natural hazards. Reservoirs in karst often face the problem of large-scale leakage through fractures and cavities. Sinkholes and collapses of underground cavities are a major problem in large areas of the Eastern USA and elsewhere.

This map was prepared in the framework of the Worldwide Hydrogeological Mapping and Assessment Programme (WHYMAP). IGRAC is a WHYMAP consortium member and was involved in the DIKTAS project of which its results were incorporated in the World Karst Aquifer Map.

Hydropower and Groundwater in Karst