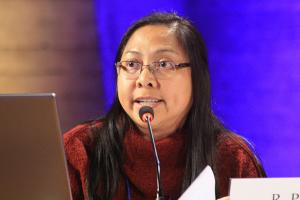 UNEP, the implementing agency for the TWAP, has selected Ms. Liana Talaue McManus as the Project Manager for the project. She will be working as a consultant, part time in Nairobi and part time from her home in Florida.

Liana Talaue McManus is a biological oceanographer by training, she was previously a Scientist and Associate Professor of Marine Affairs at the University of Miami Rosenstiel School of Marine & Atmospheric Science. She pioneered participatory approaches for integrated coastal planning and resource management in the Philippines in the 1990s when natural resource governance was devolved to the local level. Her study area, the town of Bolinao in northern Philippines, was the first local government to legislate a coastal development plan in 2000, and which has since become a standard requirement for coastal local governments to receive their budget allocations from the national government. At the regional scale of Southeast Asia, she conducted a transboundary diagnostic analysis of the South China Sea in 1998, as well as coordinated a 7-country initiative to examine the social and economic root causes of water-related problems and concerns in the region. This work formed the basis of a Global Environment Facility (GEF)-sponsored project to sustainably manage the coastal and ocean resources of the South China Sea that concluded in 2009.

From 1995 to 1999, Liana led the Philippine study on the anthropogenic influences of biogeochemical cycling in Lingayen Gulf, and co-lead a comparative study across four sites in Southeast Asia. At the global scale, she is involved with global coastal change research and the effective integration of human dimensions with natural science in examining and managing coastal and open ocean environmental issues. Liana chaired the Scientific Steering Committee of the Land-Ocean Interactions in the Coastal Zone Project from 2002-2004; and was Co-Chair of the Coastal Panel of the Integrated Global Observing System from 2003-2007. Liana is also a founding member of the GEO (Group on Earth Observations) Coastal Zone Community of Practice. She is active in institutional and policy research in the state of Florida, USA, and in the Caribbean nations including the Bahamas and the Dominican Republic.