1st UNECE Assessment: Convention on the Protection and Use of Transboundary Watercourses and International Lakes 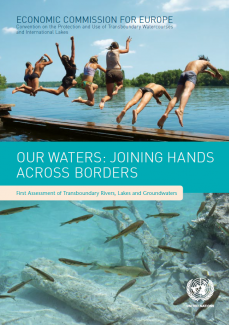 Transboundary waters connect populations of different countries. They are a major source of income for millions of people and create hydrological, social and economic interdependencies. Transboundary river basins cover more than 40 per cent of the European surface of the UNECE region, and of the 56 UNECE member countries, all but Cyprus, Iceland, and Malta share water resources with one or more other countries.

Our Waters aims to inform, guide and stimulate further action by Governments, river basin organizations (joint bodies), international organizations and relevant non-governmental organizations to improve the status of transboundary waters. It describes the hydrological regime of these water bodies, pressure factors in their basins, their status and transboundary impact, as well as trends, future developments and envisaged management measures. Water sharing among riparian countries, increasing groundwater abstraction for agricultural purposes and drinking water supply, pollution from diffuse sources (e.g. agriculture, urban areas) as well as point sources (e.g. municipal sewage treatment and aging industrial installations), and the effects of climate change on water resources are among the many issues documented here.

This first assessment was carried out under the auspices of the UNECE Water Convention, and was a joint undertaking of Governments and international and national organizations. More than 150 experts took part and IGRAC was one of the contributors.

Resources
1st UNECE Assessment: Convention on the Protection and Use of Transboundary Watercourses and International Lakes