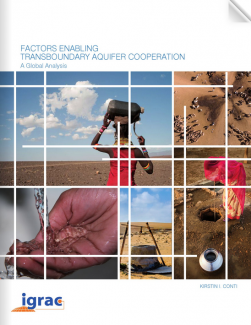 In recent years, significant attention has been given to the potential for conflict over water resources, particularly transboundary resources. However, research has shown that it is considerably more likely that stakeholders will use cooperative approaches than adversarial ones (Yoffe et al. 2004; de Stefano et al. 2010). While cooperative events are relatively well-documented through media and publicly available information, there is a gap in understanding what conditions facilitate sustained cooperation over water resources. This gap is even more evident when it comes to transboundary aquifers because researchers and practitioners have given them less attention than their surface water counterparts (Jarvis et al. 2011; Linton & Brooks 2011; Feitelson 2003; Machard de Gramont et al. 2011). However, the importance of transboundary aquifers cannot be emphasized enough. There are 608 identified transboundary aquifers worldwide underlying almost every nation – excluding most but not all islands (International Groundwater Resources Assessment Centre 2014). These resources are of considerable importance given that groundwater from TBAs fulfills basic human needs and irrigates arable lands worldwide (Siebert et al. 2010; Döll & Hoffmann-Dobrev 2012). Further, countless habitats rely on groundwater flow for their survival, such as groundwater-dependent wetlands and desert ecosystems. Given the critical importance of groundwater resources worldwide, this report will present a global analysis of factors that enable and facilitate cooperation over transboundary aquifers.