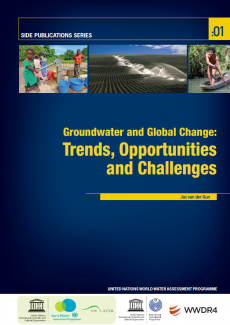 Groundwater – containing by far the largest volume of unfrozen fresh water on Earth – is a hugely important natural resource. However, what the general public and most decision-makers know and understand about groundwater is usually very little. Today, knowledge of groundwater around the world, its functions and its use is increasing rapidly – and views about the many ways in which groundwater systems are linked with other systems are changing accordingly.

All around the world, groundwater is a resource in transition: its exploitation started booming only during the twentieth century (‘the silent revolution’). This boom has resulted in much greater benefits from groundwater than were ever enjoyed before, but it also triggered unprecedented changes in the state of groundwater systems. On a global level, the key issues that need to be addressed to ensure the sustainability of groundwater resources are the depletion of stored groundwater (dropping water levels) and groundwater pollution. Climate change will affect groundwater, but because of its characteristic buffer capacity, groundwater is more resilient to the effects of climate change than
surface water. Therefore, in areas where climate change is expected to cause water resources to become scarcer than they are at present, the role of groundwater in water supplies is likely to become more dominant. Their buffer capacity is one of the major strengths of groundwater systems. It allows long dry periods to be bridged (creating conditions for survival in semi-arid and arid regions) and generally reduces the risk of temporary water shortages. It also smooths out variations in water quality and causes a portion of the stored water (medium-deep to deep groundwater) to be relatively insusceptible to sudden disasters, thus making this portion suitable as an emergency water source.

In terms of making a contribution to securing water availability and groundwater-related environmental values, managing groundwater resources sustainably is of vital importance to society and the environment. Nevertheless, there are situations where sustainable exploitation of groundwater is unlikely to be achieved. Such situations include, for example, cases of tapped non-renewable groundwater resources, and many of the intensely exploited renewable groundwater systems in arid and semi-arid zones. Such cases should be identified and the population of the areas concerned should be prepared in good time to adapt effectively to a future when these resources will be exhausted. Groundwater governance is complex and needs to be tailored to local conditions. In the case of transboundary aquifer systems, the international dimension adds complexity. International cooperation and a wide range of international initiatives produce significant added value. This cooperation is instrumental in enhancing and disseminating information about groundwater, in developing and promoting approaches and tools for its proper management, and in raising global commitment for action on priority issues, such as the millennium development goals (MDGs) and sustainable development. Ensuring that groundwater is adequately incorporated into such global actions is a challenge for all groundwater professionals.