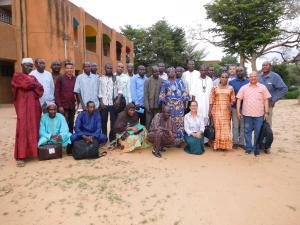 On August 22nd and 23rd, a stakeholder workshop to kick off the GroFutures comparative study in the Iullemmeden basin was held at Université Abdou Moumouni in Niamey, Niger. During this workshop, IGRAC and the GroFutures Team facilitated a session of the Groundwater Serious Game that was attended by 28 participants. Among the participants of the game session, there were researchers from the university (professors and students), local authorities, hydraulic engineers from local organisations as well as farmers using groundwater to irrigate their crops. The game session, which featured simultaneous translation into French and Haoussa, helped the project team and the stakeholders to better understand the groundwater dynamics and the challenges to be faced in the coming years.

After the session the team had the opportunity to discuss the experience during the game session and to highlight the importance of opening up the discussion of sustainable and joint management of the groundwater resources as a shared resource (domestic and irrigation uses, surface water versus groundwater). The Groundwater Serious Game session also proportioned a good integration of the stakeholders of the Iullemmeden basin in a lucid and dynamic way.

The Serious Game on Improving Groundwater Management Through Cooperation and Collective Action, developed by IGRAC, is being applied to case studies of GroFutures (Groundwater Futures in Sub-Saharan Africa), a 4-year research project, funded by the UK government under its UPGro (Unlocking the Potential of Groundwater for the Poor) programme,  seeking to develop the scientific evidence base, tools and participatory processes by which groundwater resources can be used sustainably for poverty alleviation in Sub-Saharan Africa (SSA). This project involves comparative studies in Ethiopia (Upper Awash Basin), Niger and Nigeria (Iullemmeden transboundary Basin) and in Tanzania (Great Ruaha Basin).